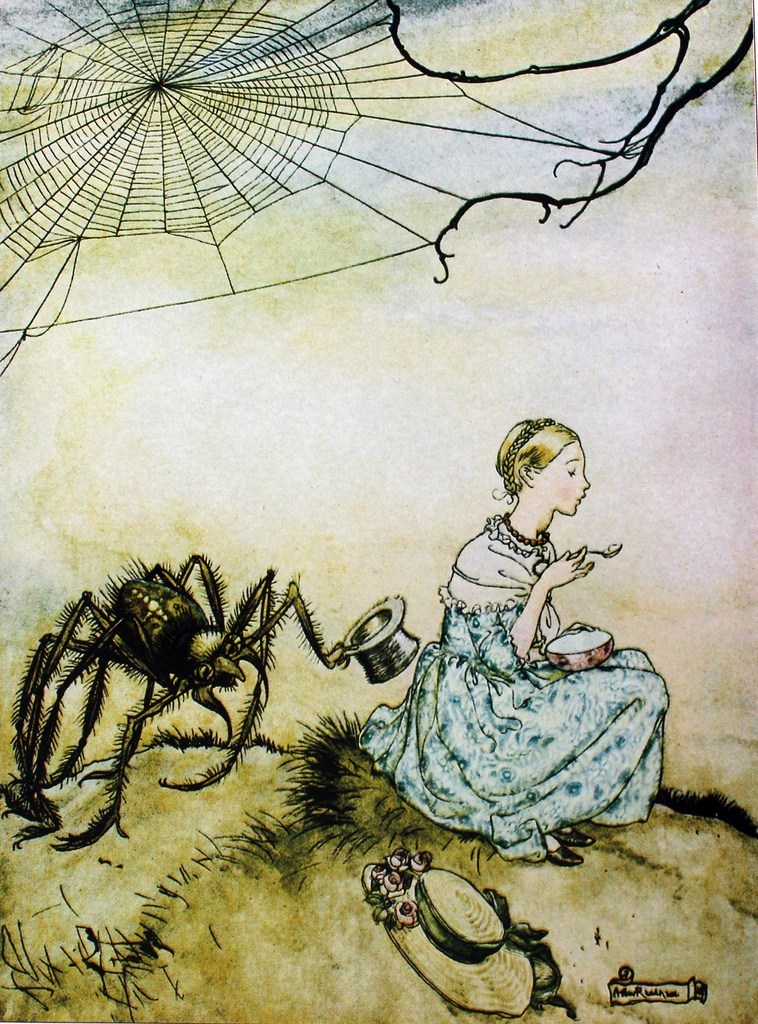 If you’re a Westerner, you’ve seen Arthur Rackham’s work. You may not recognize his name. However, you’ve seen his work in fairy tales when you were little.

You’ve more than likely seen the featured image of Little Miss Muffet and the spider. Yes, that is Arthur Rackham.

He was born in 1867 on September 19th in Lewisham, England. Rackham got famous during the Golden Age of English book illustration, which were 1890 until WWI.

He did everything from Brothers Grimm to Hans Christian Anderson to Peter Pan in Kensington Gardens. Rackham actually made pretty good money in his lifetime, both for his works for private collections and also for his work for children’s illustration. Of course, he’s best known for the latter.

I knew the above piece as Seven in One Blow. Maybe the English call it The Valiant Little Tailor. As a child, that was one of my favorite stories as the kid had a certain smugness to him. I loved that, and an adult, I preach confidence.

So much better to err on the side of confidence than doubt. The little tailor had a swagger to him that got him to conquer the giants, save his kingdom, and marry a princess, despite coming from such a humble beginning.

Anyways, Rackham died of cancer at the age of 71 at his home in Surrey. Long after his death, his works still sell quite well. You’ll also see his works on greeting cards.

I was heavily into fairy tales as a kid so I remember his work quite fondly.

Why he’s so important

Personal opinion – childhood culture is highly important. I was adamant about reading to my son as a child. I read to him Treasure Island and all seven of the Narnia books. Although Rackham didn’t illustrate any of those books, I’m sure my son has seen a lot of Rackham’s works in the fairy tales I’ve read to him.

Fairy tales form the basis of childhood culture. I remember every single one I read, and when I stumbled across Arthur Rackham’s name in Wikipedia by complete chance, it immediately brought back a lot of memories.

I’m a huge proponent of culture and the arts. We should know this stuff as it enhances our brains and creativity big time!

Rackham didn’t do the first few editions but did do the 1907 edition of Alice in Wonderland. He also illustrated a story Wagner made into an opera.

And that’s what I’m getting at. As childhood culture is highly important, expand it and you get the fantastical stories that Wagner drew from. And Wagner is my fourth favorite composer (after Tchaikovsky, Beethoven, and Brahms).

The Birth of Venus