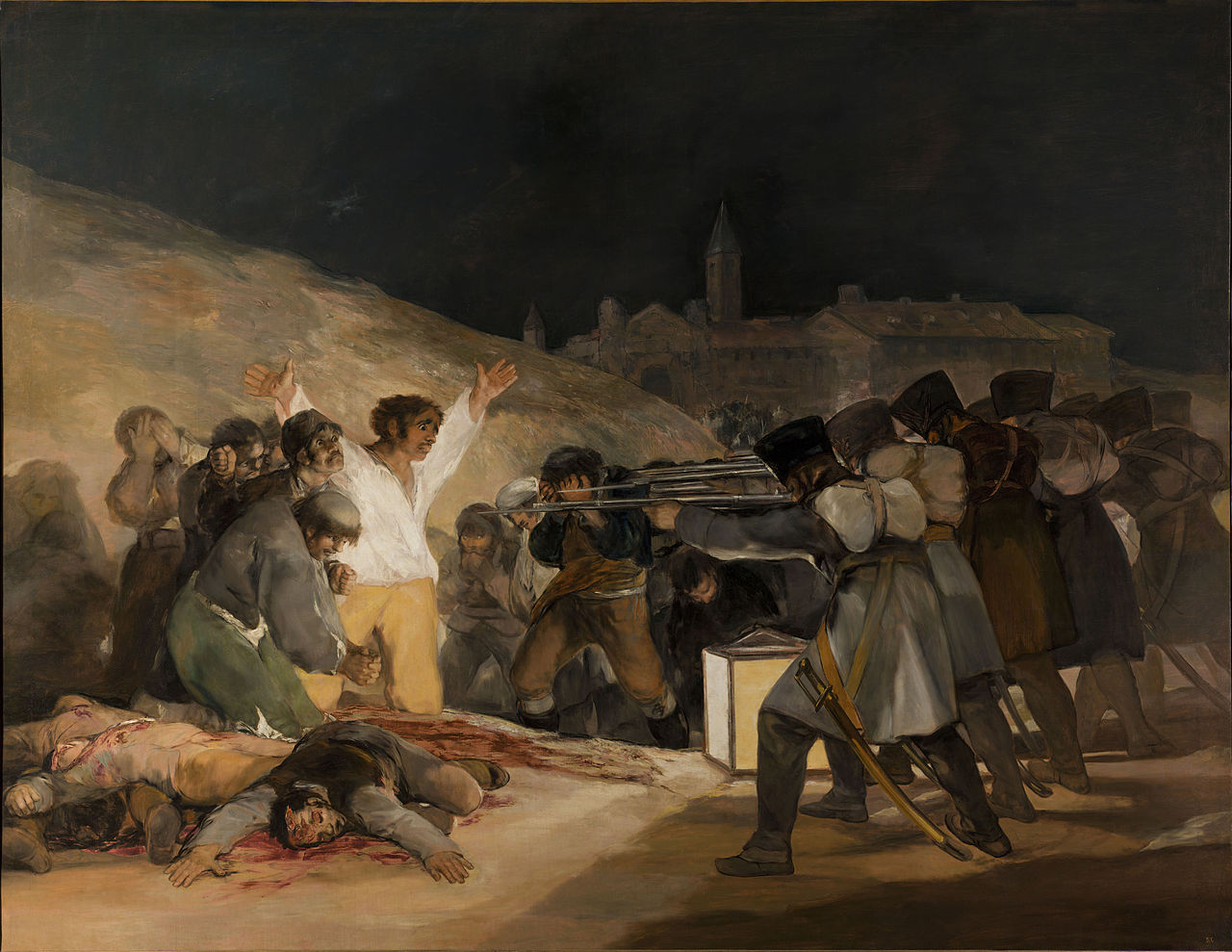 Francisco Goya isn’t my favorite artist of all-time. I’m writing about him first in my Artists I like series because he’s the very first non-American artist I studied in real life.

My wife and I have a hard rule. Every year, we have to leave the country to a country we haven’t been to before. Our bucket list includes travel and that means we must get to all 50 states and as many countries as possible before we die.

We hit Spain in 2015. We spent nine days there – six in Madrid and three in Barcelona. That’s it. We definitely need to go back. Two cities in nine days wasn’t enough at all.

Francisco Goya lived a very long time. Goya lived long enough to actually see his paintings in the Prado. How cool would that be to actually accomplish that while still alive?

It’s like that Queen song on A Night at the Opera. “On Friday’s I go painting the Louvre.” Despite hearing that song over a hundred times, I still laugh at that line. You don’t just paint in the Louvre. Just like, you just don’t paint in the Prado. You have to be on an immortal level of artistic success.

Goya was a Romantic. I consider myself a Romantic as well. You might see my work and say “wait, that’s not Romanticism!” Well, you got me. I’m working backwards. First, I want to master the American pinup style before getting into true Romanticism.

Goya though was the real deal. He influenced so many people after him. I admire his work so much that I even watched that Goya’s Ghosts movie. No, it wasn’t as bad as the critics made it out to be. Apparently, the critics hate it.

Anyways, yes Goya was a Romantic. His The Third of May painting is one of the most powerful paintings ever painted. Period. It is often the example that an Art History professor uses when going over Romanticism.

I’ve seen it in real life, and pictures don’t do it justice! It’s so much more powerful in person.

I’m not going to go over his entire career. It was long, and Goya went through several huge evolutions. However, I do want to cover four paintings that mean a lot to me.

When studying an artist, I strongly suggest focusing on two to five paintings and really knowing them. It’s way easier than trying to grasp their entire body of work. If you can do the latter, more power to you. But, there’s so much really good art out there that I simply don’t have time to learn everything.

The same goes for music, but that’s another story for another day. So I’m going to select four paintings that mean something to me, other than The Third of May, which everyone’s already seen.

In English, the Nude Maja. This one’s too shocking for its time so it had to be kept in private. It’s currently in the Prado. But it used to be kept privately by Goya’s friend Manuel de Godoy, who more than likely commissioned it of Godoy’s mistress. Godoy was Prime Minister of Spain.

Anyways, I love how sexual it is. It’s not just some generic nude, which I find more often than not boring. I like my nudes to have something more to them.

This one is beckoning. You almost wonder if Goya hit it as well as Godoy.

Goya got off on a technicality.  He explained that he was only following tradition and assured the Inquisition that he was not intentionally creating depravity. 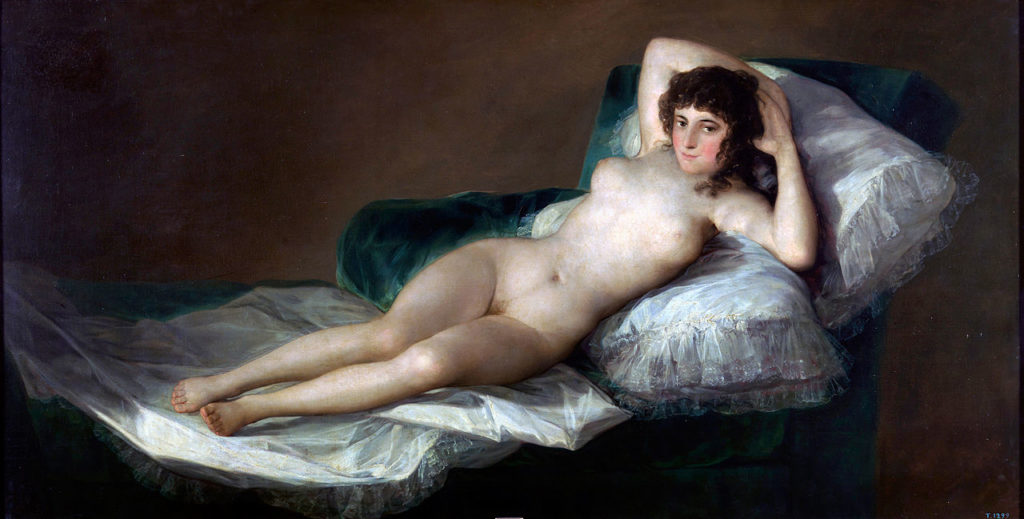 I was a strange kid. I could tell you every single recent NFL score and every single major career stat off the top of my head. As a kid, I won my father’s football office pool a bunch of times. Against full grown adults.

I also knew all about the Greek Gods and Goddesses. I knew all the major ones and their histories.

This painting freaked me out as a kid. I always imagined that Saturn swallowed them whole. I never imagined Saturn (I knew him as Cronus) eating them like this.

Now in real life, this is even more disturbing. Part of Goya’s Black Period. 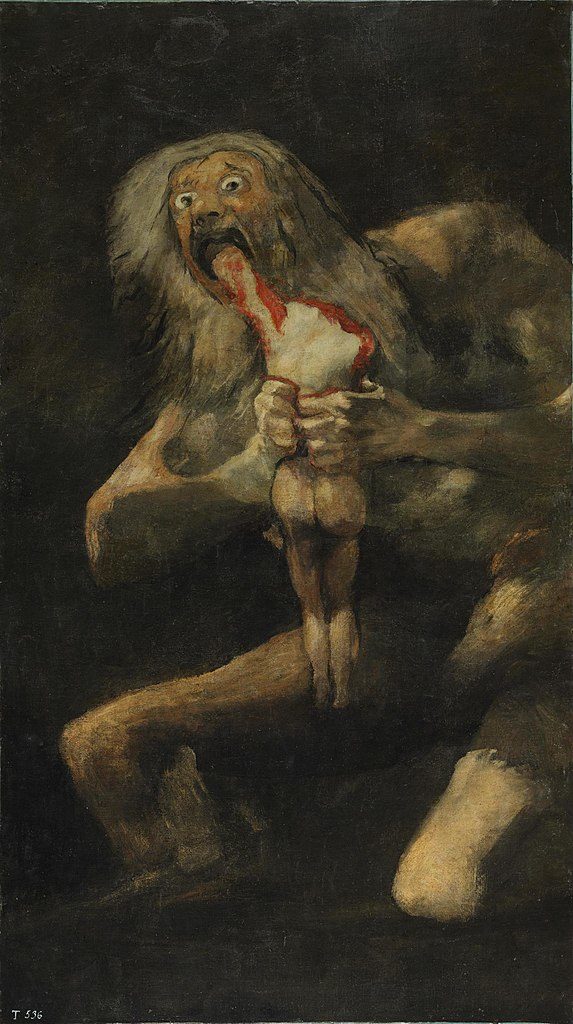 The Family of Charles IV

King Charles IV commissioned a lot of work from Goya. He and his family loved Goya, obviously.

Goya was neat for his day. Rather than painting the ugly members as beautiful, he painted them exactly as he saw them. For some, that was a big no no.

That’s why I only paint beautiful women. I can’t make someone ugly beautiful. Cursed by Goya? Who knows.

You have to see this in real life. It’s magnificent! It takes up an entire room. 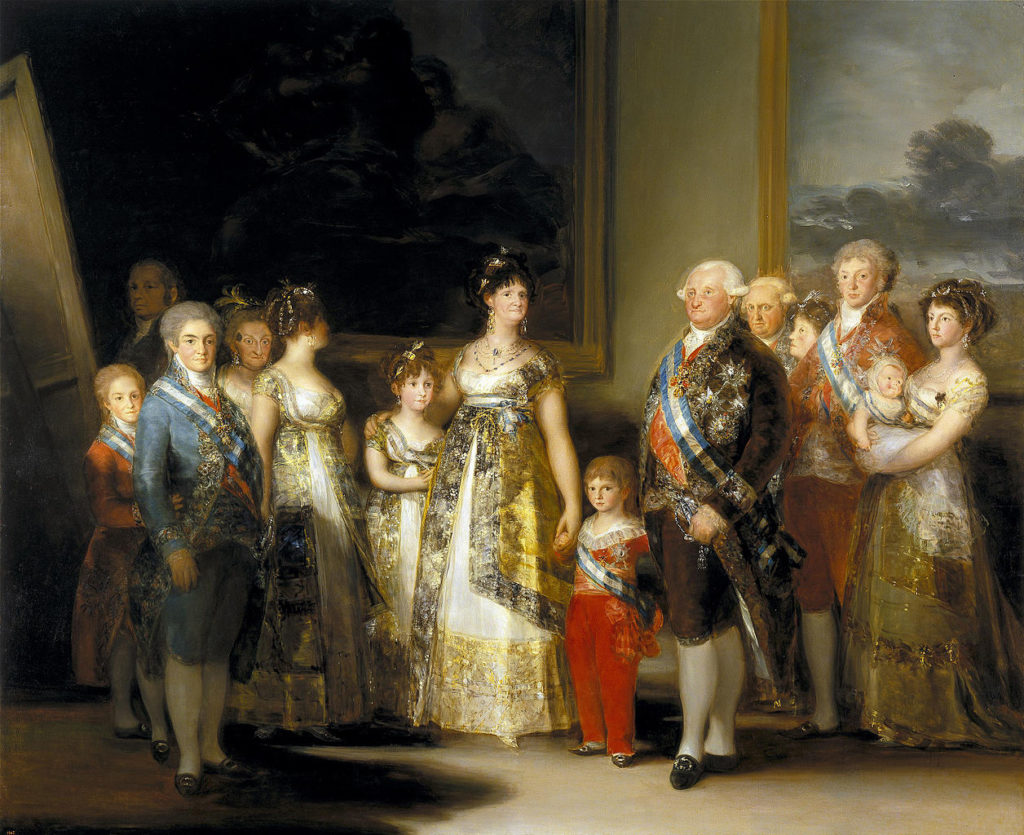 The Disasters of War

This isn’t one painting. Rather, it’s 82 prints done between 1810 and 1820. They’re some of the most brutal pieces of art ever devised, resembling something off a Cannibal Corpse album cover rather than something you’ll find at a museum.

I’m not going to post any of them. I’d much rather you do the research yourself, and also study the history of them. It’s of utmost importance that humans learn from history so they don’t repeat it.

Yeah, you’ve heard that saying a million times. But, does anyone ever practice it?

Goya wasn’t the first artist to have political motivations in his works. But, he’s definitely one of the best. These pieces were so powerful that he had to publish them posthumously for his own safety.