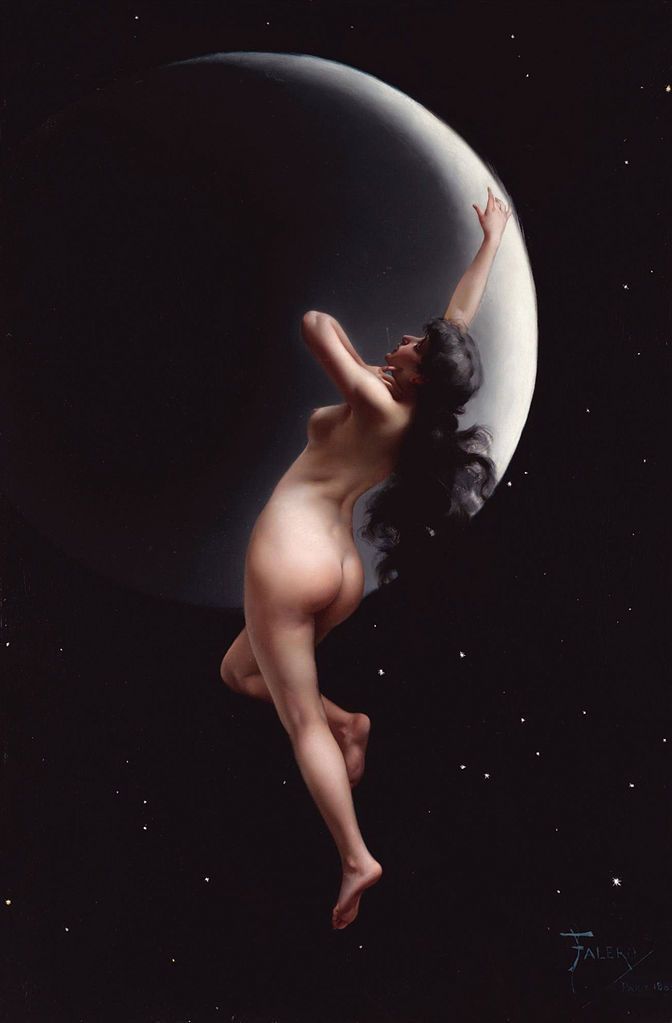 It’s important to know what you like, for it will be those people you’ll be stealing from. Most folks would rather say “inspired by” but I prefer honesty. When I like something, I steal.

I steal so much from so many different sources though that you cannot even tell I stole from anyone. That’s how you properly steal.

Musically, I’ve stolen from everyone from Tchaikovsky and Beethoven to Judas Priest and Dimmu Borgir to Loreena McKennitt and Blackmore’s Night to Queen and Prince. For painting, you can simply look at my artists category. I’ve stolen from all of them. Plus add the 20th century American Pinup artists and the Art Nouveau artists in there too.

I love Falero’s work. I’m going to have to do some digging for a proper biography on the man. Wikipedia barely has a page. Other websites have less. I can’t even find a biography on Amazon. I could probably do hours of research and barely get a paragraph or two more.

So, I’ll give you the quick rundown. Luis Ricardo Falero was a Spanish painter who was born in Granada, Spain in 1851. They don’t even have his birthday.

His parents wanted him to pursue his original career in the Navy. He didn’t. He went to Paris and studied art, chemistry, and engineering, and of course settled on art. Falero loved astronomy and his love for it showed up in some of his works.

He got Maud Harvey pregnant when she was 17. She was originally his housemaid, then model. She sued him for paternity payments and won, but he died that year in 1896 at the age of 45.

No details of his death other than the hospital he died at. That’s all I got. Funny – I’ll actually ask you. If you know more about the man, please enlighten me. I can’t find shit about him other than this.

Now of course I can talk about his style and why I like him. He was into mythology, nude women, and fantasy. Exactly my favorite three subjects. Thus, I loved his work already.

Falero painted with oils on canvas.

I love how his women have a realism to them. Like they can almost come out of the painting. He paints with such depth that you almost have to check your face to see if you’re wearing 3-D glasses.

Anyways, enjoy Luis Ricardo Falero’s work. And let me know if you like it or not. I’m interested in your thoughts, even if they differ from mine.

The Birth of Venus