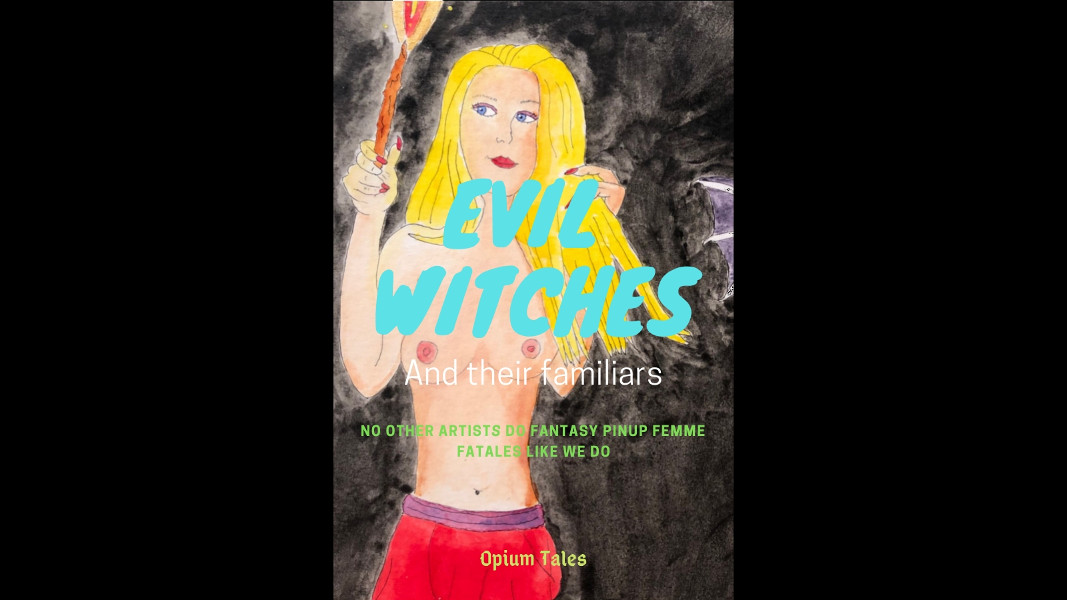 I’ve painted a lot of mermaids recently. I think I’m going to take a break from mermaids for awhile. I think it’s time to explore a whole new category of femme fatales. How about witches?

My prior witches were more sloppy than evil. Like the young witch who accidentally unleashed a poisonous snake.

This time around, I want evil. And not just the witches. How about painting some evil familiars to ride along with the witches?

A lot of good witches like cats. That goes back, way, way back. Back in the Salem days, we had cats to get rid of the rats. They made great pets. They’re not only your pets, they also took care of a practical problem.

Now, I’m convinced that the whole reason for the Salem Witch Massacre had nothing to do with witchcraft and everything to do with inheritance. Some old ladies often live a real long time. And some would be inheritors are absolutely shitty people. I’m pretty sure you can put two and two together here. Yes, ’twas a conspiracy to get their land and/or money.

But let’s go back further and dive into the world of Medieval Fantasy, my favorite inspiration for art.

Whereas good witches often have cats or owls, evil witches prefer familiars that are a bit more “combat ready.” So evil familiars aren’t just a cunning evil creature that sits on your left shoulder (remember to throw your pinch of salt over your right shoulder when you’re an evil witch). They also have combat purposes. They have a mean bite. And worse.

Imps were human once. Damned to the fiery pits of Hell, an evil witch will often bring one back and use them as familiars.

Imps were evil beta males. They got pushed around in life and when they murdered in their past human incarnation, they wouldn’t exactly do it in a confrontational manner. They feared direct conflict. When they had to do it directly, they made damn sure the odds were strongly in their favor.

You know the old stick versus carrot rule. As familiars, think in terms of two sticks for each carrot. You still have to carrot them since their sense of loyalty is already pretty bad. If you don’t, they’ll either take off or try to kill you in your sleep.

An evil witch can live hundreds of years. Whereas a human usually dies in double digits, not an evil witch. They can get quite old.

However, dragons live in the thousands of years. We’re talking a whole different ballgame.

Baby dragons make wonderful familiars. The problem with baby dragons is that they’re very rare. Humans and dragons have been at war for forever, with humans in recent years coming quite close to causing dragon extinction.

Their natural habitat? Geez. It’s so small now that I’m not even sure where to find them.

You may be thinking how come humans got the upper edge on dragons, considering dragons are so powerful and so smart. Simply put, biology. Dragons take forever to mate. Dragon eggs only hatch under ideal situations.

But humans? Babies only take nine months to create and are combat ready in only fifteen or sixteen years! No way dragons could keep up with that.

If you ever see a witch with a dragon familiar, she’s on a whole different level of power. Cross her and she’ll not just kill you. She’ll take down your entire Kingdom.

Some witches are so evil that they absolutely detest sunlight. No, they’re not going to exactly burn up and die like a stupid vampire. Rather, they’re at their best after the witching hour.

Those are the kind of witches you’ll find with hellhounds as familiars.

Hellhounds cannot come out in the sunlight. You’ll only encounter them at night. And if you encounter them, you’re in a heap of trouble.

If you see a witch with a hellhound as a familiar, you’re in a super duper heap of trouble. You got a serious problem.

Hellhounds usually signal death when a human encounters one. Generally, the Devil himself sends a hellhound after someone who sold him his soul. That cursed someone knows his time is short. And he’s on the run, for he knows when the hellhound catches him…

For a witch to actually raise one of these foul (and foul smelling) creatures as a pet? Well, she’s got to be more evil than your average evil witch. Plus, she more than likely doesn’t have a working olfactory sense. Did I mention that hellhounds stink?

There isn’t exactly one size fits all when it comes to evil witches. Whereas most evil witches are pretty good at direct physical confrontation, leaving their opponent either in tatters, turned into an amphibian, or burnt to a crisp, some work through other methods.

The kind of evil witch that has a nightmare as a familiar you probably could conquer in a physical confrontation. That’s not the problem.

Just don’t ever go to sleep. That’s where she’ll get you.

Nightmares cause nightmares. But a Nightmare’s nightmare is so powerful, it causes death. Yes, you’re literally scared to death.

So if an evil witch extorts you, it’s more than likely one of these witches. You have two choices. Either pay her off. Or, find her and exterminate her.

If you do the latter, you better find her location before you go to sleep. Once you sleep, she wins. You simply won’t survive an encounter with her nightmare familiar.

There’s a Hellhound on my trail

Do evil witches throw the salt over their right shoulder?

What is a Selkie?