I am a Romantic. No, not the cheesy 20th century definition. I fucking hate how they took something awesome like Romanticism and turned it into something pretty fucking stupid. 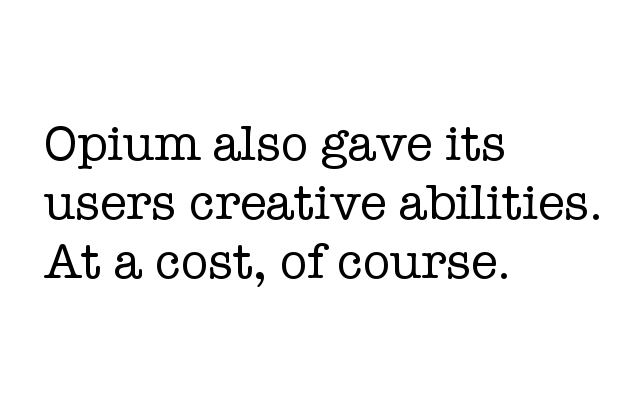 I am a Romantic, 19th century definition. If you have no idea what I’m referring to, read the Wikipedia page on Romanticism.

Opium was the drug of choice for Romantics

Well, alcohol too. So opium and alcohol were the drugs of choice for the Romantics. However, Alcohol Tales has no historical context. It’s also meaningless. “A bunch of drunks telling stories? How fucking boring. I’d rather read the news”.

Opium also gave its users creative abilities. At a cost, of course. Like the Devil, you can have the item you desire. It will just cost you something later on.

Thus, Opium Tales makes sense. It has historical context. You know they’ll be unique. And you know at the very least, they’ll be interesting.

This won’t be the only medium you’ll see them

You’re reading a blog. However, this won’t be the only place you’ll see Opium Tales. You’ll also see them in my music. You’ll even see them somewhere else.

For that, I won’t go further as I’m currently in negotiations for some money.

By the way, I’m also a painter. Check out some of my works..

The legend of the Flaming Poo

It’s all about persistence