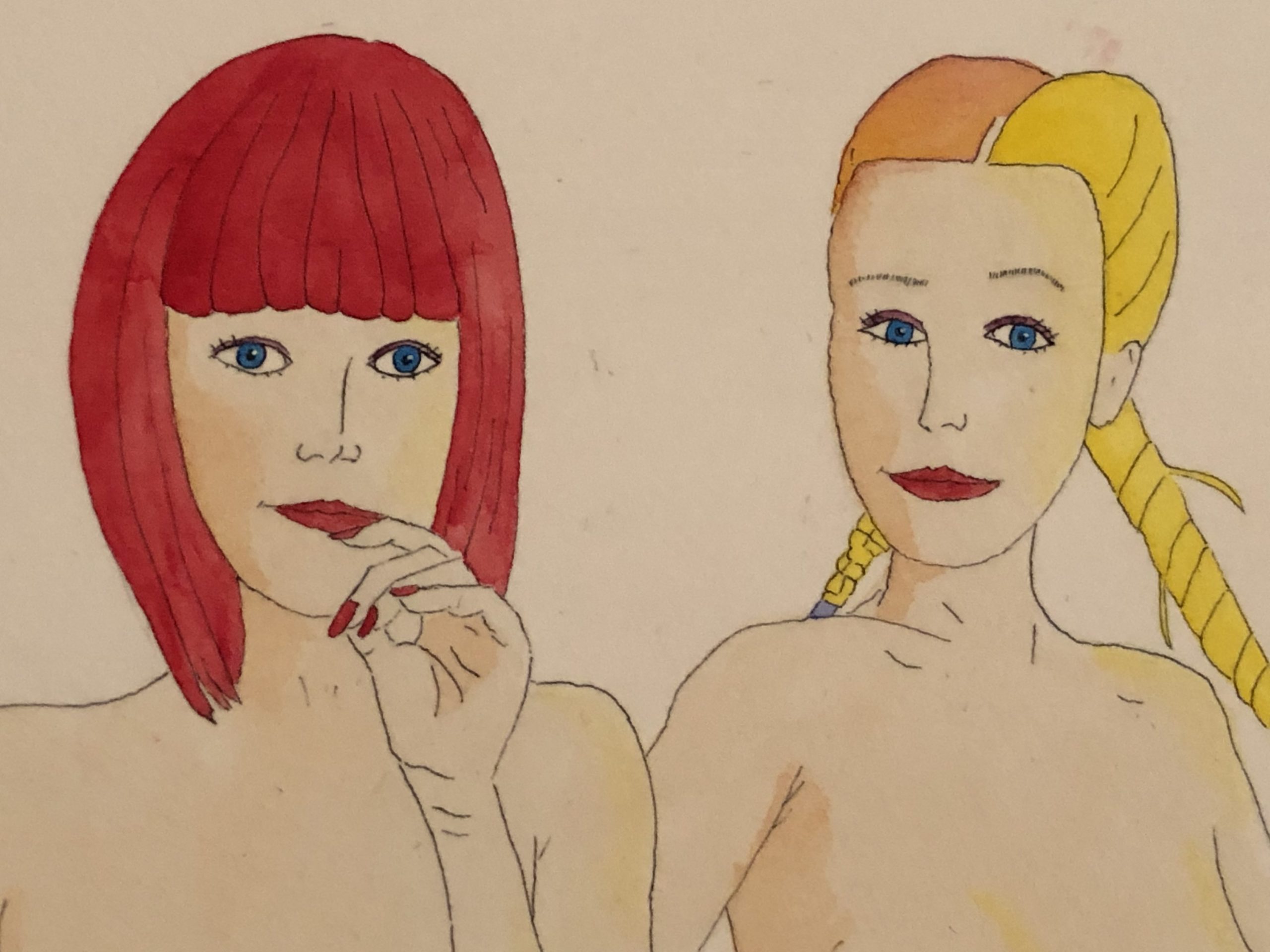 I primarily use two models for everything – Allie and Roxy. Allie is the blonde. Roxy is the brunette. Both of them are some of my closest friends on the planet.

I worked with Allie throughout her pregnancy and regret never doing a pregnant painting of her. I really should have, just to do.

She’s already looking great, despite her baby being born earlier this year. How did she recover that fast? I’ll leave that a secret, just in case Allie wants to write a book or sell a course.

Seriously. I should encourage her to do just that.

Occasionally, I’ll use other models. I’ve use Jin n Tonic before a few times now. Jin modeled both for my selkie painting and also for my homage to Mel Ramos.

As we speak, I’m taking a break from finishing up Alicia, a character from my Humpty Dumpty story. Roxy modeled for this one, and I’m going to sell it in an eBook form since it will have a shitload of illustrations, mostly really cool doodles.

If you’re wondering how to find pinup models, that’s an entirely different topic. I actually put a paid ad out. This isn’t my ideal way to find them though as I like to know people really well. I knew Allie and Roxy before they were my models and I knew Jin from working on music videos before from a failed band.

This weekend, I’m working with two new models. If they’re the right fit, I’ll keep one or both of them. If not, then I’ll keep looking. I want to have more than two regular models to work with. Of course nothing against Allie and Roxy, they’re the best, but for variety’s sake. I simply can’t have the same two women for every single character I come up with.

More than everything else combined – fit. We have to get along. And she’s got to fit the part.

Getting along is huge. I’m an artist. I’m probably more emotional than most. Some people I love to death. Some people, I’d never work with again.

If you come into a relationship and immediately lay down your laws, I’m going to roll my eyes and it will be a one time thing.

However, if you’re super cool, I’ll be more than happy to work with you for years. I’m like a dog. The people I like, I like forever.

I’ve seen a lot of overweight pinups. That’s the new thing nowadays. Love your body no matter what.

More power to you! Seriously. If you’re happy being you, I’m happy for you.

But, I’m not going to work with someone without the body shape I like. I like a woman with more 1950s curves. Like Bettie Page. Or Marilyn Monroe.

Sure, not everyone can have a body like Marilyn Monroe. Allie and Roxy both do though. And Allie just had a baby.

I’m an artist, not a doctor. But, I lost 15 pounds by cutting carbs and eliminating processed foods entirely. If you go through our house, we have pasta, rice, and everything else will spoil. We eat mostly meats, fruits, and veggies.

No more sugars. The only sugars we get are from natural foods, like apples, bananas, grapes, etc. We also try to eat organic when available and free ranged meats when available. Our eggs are all either organic or at least free range.

Once again, I’m not a doctor. But, I myself lost a lot of belly fat by changing my diet.

Every once in awhile, we’ll order a pizza. I’ll only eat cake if one acquaintance of ours makes it. Her cakes are the best cakes I’ve ever had in my life. She’s a friend of a friend, and super talented. She even used to do sculpture and I really hope she gets back into it.

And yes, I drink alcohol. But no more beer for me. Usually whiskey or red wine.

So if I can lose weight…

Proud of her femininity

Femininity has power. A lot.

Wars were fought over beautiful women. Cleopatra. Helen of Troy. Then, you got your femme fatales that bring men to their doom because we simply can’t resist their beauty.

The pinup queen knows this. She wields her femininity with great power. It translates well to the canvas, or in my case, the watercolor board.

They’re by no means socially retarded. In fact, they’re social creatures. You know they’re there. Which leads to…

The very first time I saw Jin in real life, she was singing karaoke in Vegas. And you know what? Everyone in the whole fucking room was paying attention.

She wasn’t even dressed up. She was wearing street clothes. Yet, she had this presence that despite not looking that much like she did in her pictures, I knew that had to be Jin.

Most pinup models I’ve known drank. Not a requirement, but it’s part of the culture. For obvious reasons, Allie can’t drink too much just yet but she promised that when her kid is old enough to leave him with her parents, we’re getting plastered together.

And speaking of presence, whether you believe in aura or not, I’ll mention it. Good pinup models definitely have an aura. Olivia de Berardinis is so good as an artist that you could practically feel their aura from her paintings. Olivia is who I want to be when I grow up.

If you look at pinups from the Golden Age of Pinups, they play different roles. Sometimes, the pinup model plays the shy girl. She’s often embarrassed or in a compromised situation.

You’ll also see her play the femme fatale. Or, she’ll play a seductress for the sake of seduction, without luring the everyday man to his doom.

She could play the party girl or the naughty housewife. These are just examples. The thing is, my ideal pinup model can play multiple roles and pull them off well.

What I don’t want

I’m an open book. And I like people who communicate.

I don’t like soulless people, people devoid of life. Whether you believe in Heaven, reincarnation, or absolutely nothing, you get one shot at being you. I can’t speak for you, but I’m going to make the best of my shot.

More than half the models I’ve ever worked with didn’t have that pizazz. They weren’t full of life.

They simply went through the motions, and that was it.

That is exactly what I don’t want. I want an alive woman, not some dead ass bitch.

I want someone who loves being the character or role she’s modeling for. The way Allie or Roxy models is the best. They really get into it. We got music going on and they don’t even have to fake their smiles. They love doing it.

I’ve worked with models before that once they’re done smiling, they go right back into a dead face.

Pardon my French, but fuck that shit! I don’t work with those models ever again. It’s a one-time thing.

We have to connect

Also, we have to connect. If there’s no connection between me and you, I don’t want to work with you ever again.

It’s just like I had one corporate job in my entire life that I absolutely loved. You know why? Because several people I worked with connected. I’m still friends with those people. Actually, one of them, we were just over at his house for a wine tasting.

We argue art all the time. Often agreeing though. Like for instance, his favorite band is The Cure. I liked what is now called “Dad Metal” from that time period but I still loved the album Head on the Door.

The same goes with my pinup models. No connection, no workie again.

I’m a Romantic after all. I have to feel something. If I feel nothing, there is no art.

It’s just like when I play music. Sure, I read sheet music. But when I play, it’s not just notes. I’m playing from my soul.

So that’s what I’m looking for. I give people chances and see if they’re a good fit. If not, I don’t work with them again and I actually don’t bother painting them. They stay as sketches and that’s that.

That’s Jin (initially wearing a black wig but I changed it to red) and Allie in a watercolor painting I did for a friend. That painting is not for sale.

Why Bob Ross is one of my heroes

Why I have no competition