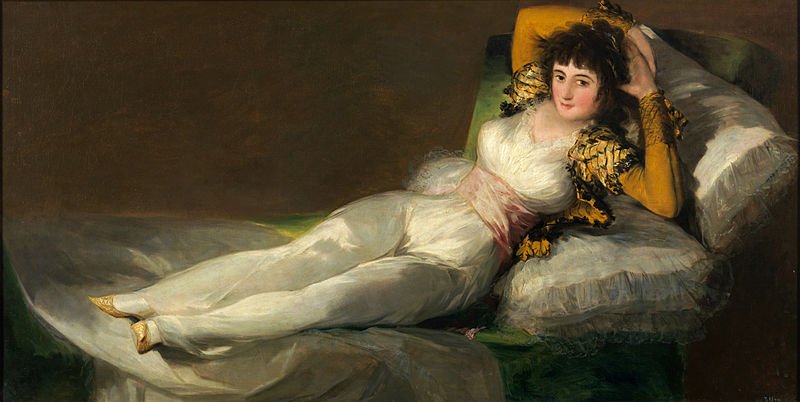 It’s pretty sad that most Westerners know nothing about Western civilization. Schools nowadays are so much more into indoctrination than actually teaching kids anything useful.

Culture is everything. Well, not quite everything. You gotta know some math and science and other shit.

But as an artist, when people talk about culture, I’m happy.

So, let me tell you a personal story and a dangerous historical story and I’m going to combine the two where we meet.

First, the mistress and the danger

Back in the old days, artists often relied on patrons. Goya had several. One of whom doubled as a close personal friend of his – Manual Godoy, who later became Secretary of State, then the Prime Minister of the Spanish Empire.

Funny background – Godoy was a regular guy. But he was a damn good guitarist, fighter, and bullshitter. Those abilities got him far in life, and he eventually impressed the Royal Family. They liked him so much that he eventually rose to Secretary of State.

But, he had a problem. He was madly in love with Pepita Tudó. Which was fine, but for political reasons, he had to marry another woman.

He ended up having Pepita as his mistress and the affair lasted until his wife died, whereupon he married Pepita.

So decades before he finally married Pepita, he hired his dear friend, Francisco Goya (who I argue is Spain’s greatest ever artist) to paint Pepita nude.

The public saw the clothed version of that painting, seen above. The Spanish Inquisition however also came across the nude version of the painting and threw a fit.

Both Goya and Godoy were called before the Spanish Inquisition for some explaining to do. This could have been the end of Goya’s career.

Luckily, Goya was super smart. He pointed out the painting’s similarities to other works of art by other artists that weren’t so controversial. And he made the Spanish Inquisition look like a bunch of philistines.

To save face, the Spanish Inquisition called it off. Thankfully, that painting remains to this day and is now side by side with its sister painting in El Prado in Madrid. So yes, I’ve seen them both in real life. Pictures don’t do them justice. At all. You need to see them in real life.

After visiting El Prado in 2015, my wife and I went to the Gothic District in Barcelona. We saw a Flamenco group perform. 8 musicians. 3 dancers. A performance I’ll vividly remember until the day I die.

I stumbled across a luthier in the Gothic District in Barcelona and just happened to have a lot of money on me at the time. I got lucky. He had a bunch of violins, some cellos, and two Flamenco guitars in stock. I walked away with a Flamenco guitar and brought it back to the States.

What did I name her? Pepita. Of course.

The story didn’t end there

You probably already know the story of Goya. If not, here’s the summary. Goya went on to be the greatest artist of his day and lived so long that he got to see a lot of his paintings make it into the Prado. Imagine that!

As for Godoy and Pepita, happily ever after?

Pepita was more his fuck buddy. Yes, he was in love with her in the beginning.

But, he really fell in love with Queen Maria Luisa, the Queen of Spain, the wife of Charles IV, and the granddaughter of Louis XV. You may know Louis XV as the father of Louis XVI, the King who got his head chopped off with his wife Marie Antoinette.

Godoy and the Queen had a secret affair. Godoy died almost two decades before Pepita did and before she died, she painfully told a reporter that the Queen was the only woman he truly loved.