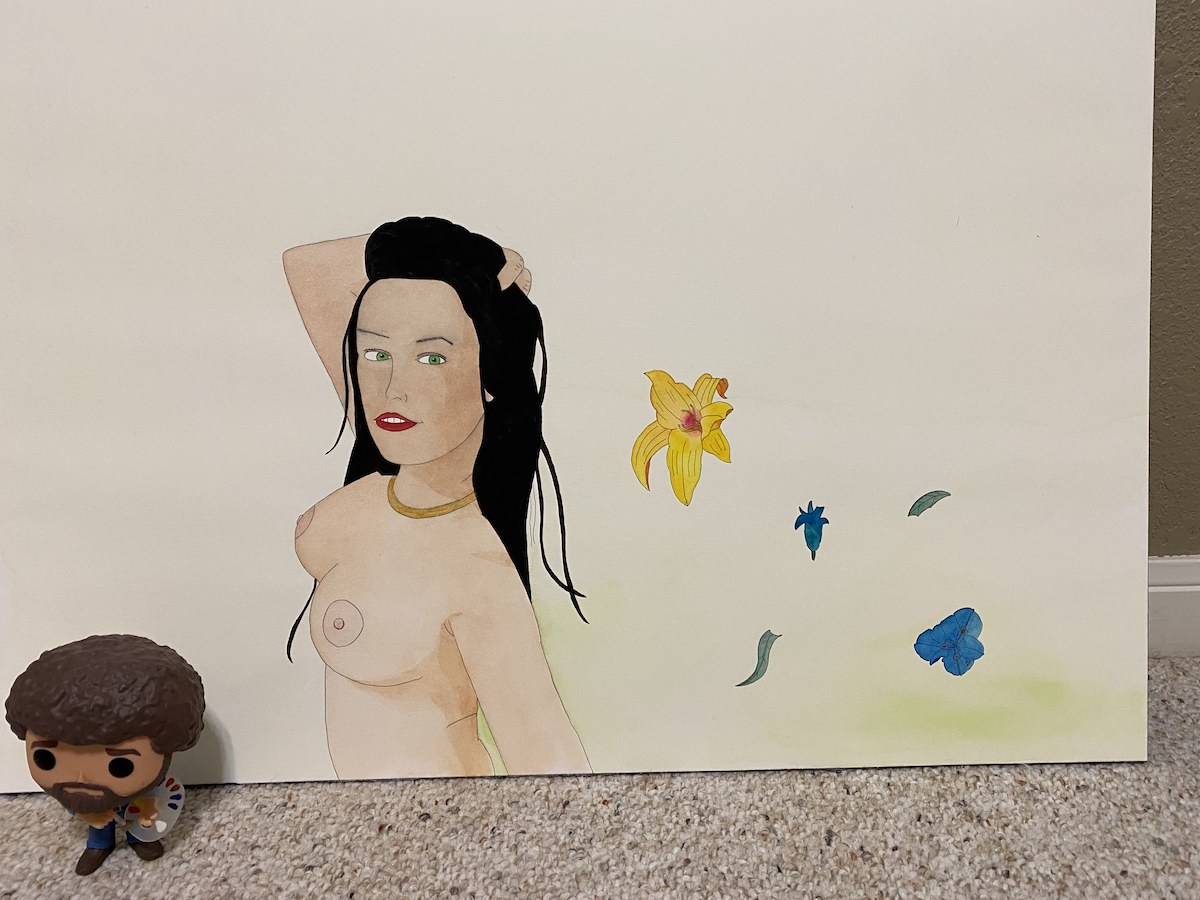 Bob Ross pretty much invented ASMR. Without knowing it of course. Some people use his voice for ASMR purposes. I’ve heard some even use his voice to help them fall asleep.

Now, if you’re into sexual ASMR, more power to you. But if you think ASMR is only sexual, do yourself a favor and look up what ASMR means. Not everything is about sex, people! (Geez, did I really just say that?)

I’m a huge fan of Bob Ross’s painting techniques. Although he’s not one of my favorite all-time artists, I’m still a huge fan of his lessons.

More importantly though, his mindset, which I rarely hear that many people talking about.

You’ve heard him say things like happy little accidents. And how he will make a mistake into a bird or a tree.

Why not apply that to life? After all, we’re all human. We’re going to flub. A lot.

But how many of our flubs are really that big a deal? If you’re driving like an idiot and kill someone, that’s something you can’t turn into a happy little accident. That’s something major. You just took someone’s future from them.

I’m not talking about anything major. I’m talking about most of our life flubs. And most of life’s flubs are rather minor but we often blow them out of proportion.

Bob Ross lets a lot of things go in his paintings. He often turns them into something even better.

Should we consider taking that mindset and applying it to life?

Like, that job interview that you screwed up in. They didn’t even call you back to tell you that you didn’t get it.

Sucked at the time, but maybe you got a better job waiting for you and you haven’t applied for it yet.

Or that cute girl you asked out and she said no. So what? Ask out another cute girl instead. Maybe the second one will treat you better anyways.

Some of us don’t care enough. Some of us care too much. It’s the latter group I’m writing to here.

I’m writing and painting constantly. You don’t get to read most of my writings because most of it is bad.

It doesn’t matter though. I write enough that I can still publish at least one quality blog post a week.

Recently though, I’ve been on a tear and publishing four or five a week. I don’t expect to keep up this pace.

Same thing with paintings. I have over 30 paintings in my garage. No one’s going to see them. They’ll never make an art gallery nor an art show because I only want people to see my better works.

The thing is, I’m painting so much that I can produce an art gallery/art show worthy painting at least once a month.

Now, this doesn’t just apply to writers and artists. This applies to life.

People are too self-conscious. Too many people don’t allow themselves to make mistakes. They get caught up in perfection.

I’ve written literally hundreds of songs. I got five available for purchase and 3 more coming out this year.

Bob Ross painted constantly. He’s got hundreds of paintings throughout the entire world. I heard one family has the majority of them.

Apply that to life. Whatever your passion is, produce. Keep producing. Savor your winning productions. Either turn your not so great ones into happy little accidents, steal something from them, or at least turn it into a learning experience.

When you talk to successful athletes, a lot of them will confess to you a weird routine or superstition. Whatever works. If it helps them get that edge, it’s effective.

I got a Bob Ross bobblehead by me whenever I paint. This is Roxy in Antheia Sends You a Selfie. Antheia is the Ancient Greek Goddess of Flowers.

Yes, there’s also Chloris but I prefer painting Antheia for two reasons. One – Chloris has flowers coming out of her mouth when she talks. That to me is a weird aesthetic. I’d rather have the flowers falling off her body like Antheia.

The second – Antheia loved gold colored items and whereas I’m indifferent about gold itself, I like painting Allie with double gold bracelets on her left wrist and Roxy with a gold necklace in honor of Gustav Klimt, who has a better command of golds and yellows than I do.

When someone is better than me at something, I never envy them. Rather, I steal from their brains.

Going back to writing, I wrote so much that I even produced a book of short stories. You can buy it here:

Why do people buy art?

On Gasoline, Animal People, and Bands that didn’t make it but were supposed to