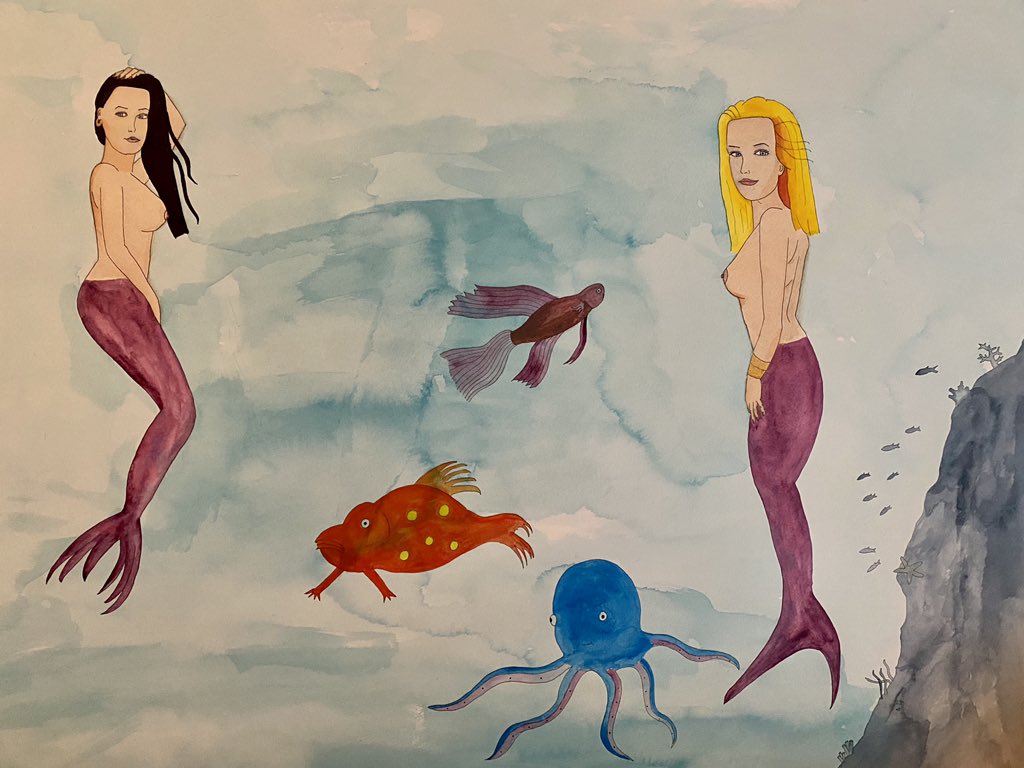 There’s an old joke that goes “I’m not an alcoholic. An alcoholic goes to meetings.”

Well, I can honestly say I’m not an alcoholic. Yes, with a straight face.

I don’t drink on the days when I go to the gym. Now of course, the gyms are closed because the governor is a moron. So I’ve been drinking a lot more recently. And crossing the line of too much.

Once I can start going back to the gym, I’ll be drinking 3 times a week and hitting the gym 4 times a week. Like normal.

Enough of that. Let’s talk about something cool.

Did you know that if you make yourself a vanilla milkshake, you can add a shot of bourbon? It’s actually pretty good. Highly recommend.

Buffalo Trace is my go to bourbon. But I’ll also drink others. I like Woodford Reserve a lot as well. Probably my second favorite bourbon right now.

I haven’t painted a mermaid in forever.

Why not? Well, I usually paint the same thing over and over until I paint something else. I’m kind of weird like that.

I’ll do something. Then I’ll think to myself “I should have done that instead.” Then I’ll do that the next time, whatever that is.

Well, I’ve been painting nothing but Absinthe Girls and girls standing knee deep in the sea for months now. It’s time I did something different.

So by different, I’ll end up doing three or four (or ten) straight mermaid paintings.

This time though, I’ll have a better background. Yes, with pinup art, the girls are the focus. Pinup paintings often put minimal effort into their backgrounds. As long as the girls look good…

But these ones will all have more complicated backdrops. Because, why not?

I can’t play guitar at all when I’m drinking. Playing live or in the recording studio, I’m 100% sober. I’ll have a drink at lunch if we’re mixing.

But if I’m playing guitar? Forget it. I’ll be loose and my timing will be off.

For writing or painting though, I want to be loose. So I’m drinking. Sometimes a lot.

When sober, I’m thinking too much. I’m pre-editing too much too. Censoring a lot of my thoughts.

When drinking, everything just flows. I don’t worry about anything. Just let the brush or the fingers flow.

So you’re pretty much getting my brain uncensored. I might go back and edit typos or bad grammar out. But other than that, I’m keeping it in.

That’s why I had a bunch of articles in a row with strong sexual elements in them. Uncensored.

I even started co-writing erotica with a female friend. She refuses to use her real name though, so if we ever publish it, she’ll need a pen name.

I’ll do the art too. I haven’t decided if I’m just going to pencil and ink or paint monochromatic. I’ll wait until we have enough material for the book before we worry about that.

Anyways, in American, cheers! In Spanish, ¡salud! In Romanian, noroc! I’ll be trilingual by 2030. Gotta start with the important words first, ya know?