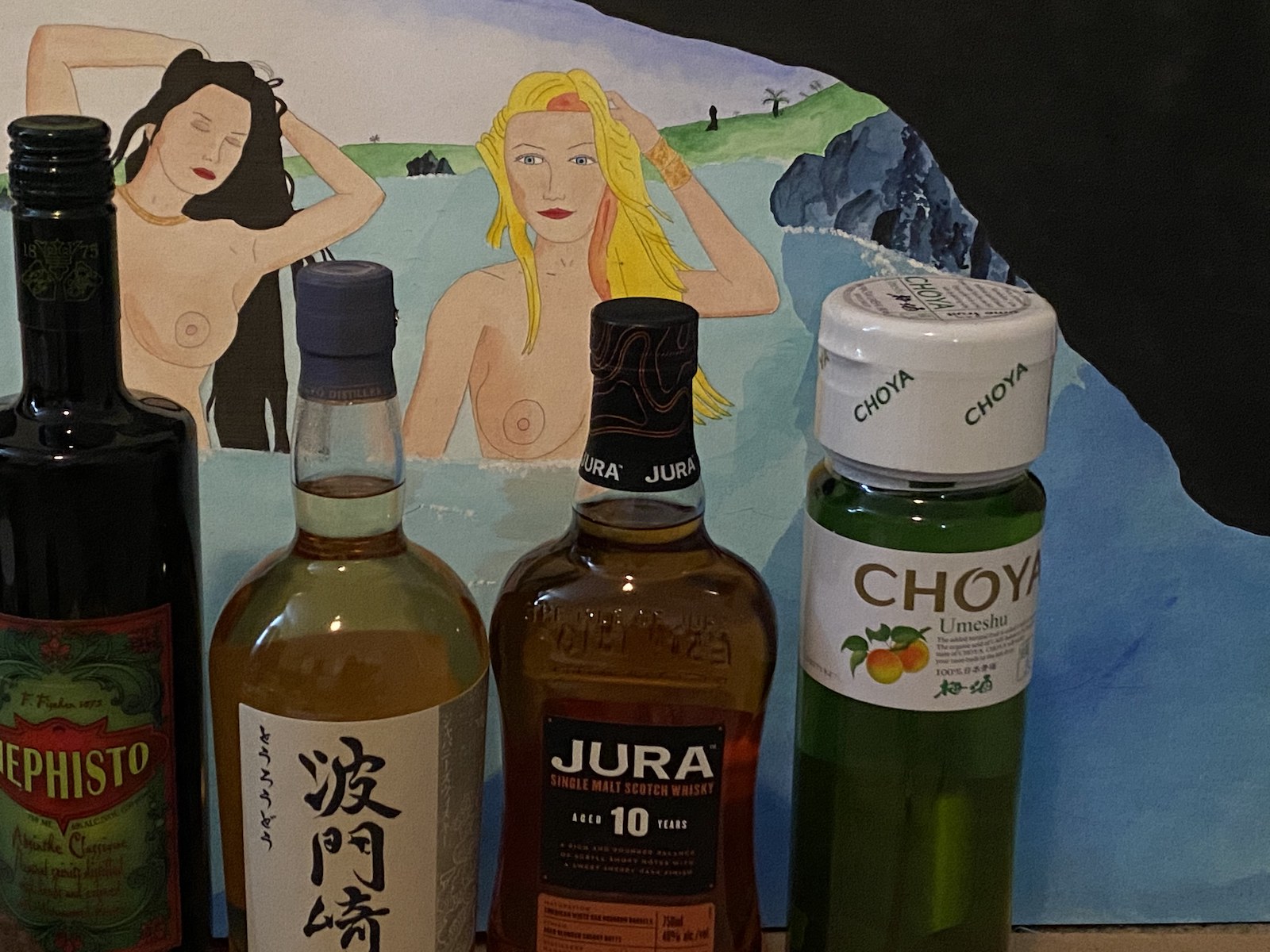 I’ve heard that general blogs are going out of fashion. That blogs should be specific, and follow a general theme.

For one, I’m not one to follow rules. For another, pardon my French, but as much as I love watercolors, I’m not going to write exclusively about watercolors for the rest of my fucking life.

So whether or not the blog fashion police come after me, I’m keeping a general blog.

I just finished one of my favorite paintings I’ve ever done. I used a recent sketch of Roxy and an old, pregnant sketch of Allie. That’s why Allie’s belly is underwater. Yes, her boobs really were that big.

My liquor for the month of May

I drink. Without apologies.

Sure, if I had too much to drink, I’d call a friend or flag down a taxi. I’m talking about at home though.

I like keeping a good supply of liquor. I also like to hear what other people drink.

The local Alcoholics R Us has an excellent staff. I also get some really good recommends online.

The two bottles to the right? A European bloke who can probably outdrink me. He raps. And drinks. So we share what we drink.

He recommended these two. I’ll pop them both open sometime this month. Geez. It’s May already. Time flies when you’re having fun.

The two bottles on the left? Well, the absinthe, the guy at Alcoholics R Us said is underrated. He said it’s a steal at that price because if you’re doing the old flaming sugar absinthe thing, which I do, it’s dollar for dollar one of the best.

As for the Japanese whiskey? Had it before. Was fantastic. Four of us murdered that bottle in one night. So, gotta replenish the supplies.

I’ll let you know how they taste.

Last night, my wife and I opened the bottle of Choya and drank half the bottle. No, it’s not 80 proof, so we didn’t get wasted. It’s only 14.6% alcohol.

Choya is a Japanese plum wine, bottled in Osaka. It actually has fruits on the bottom of the bottle.

On the bottle, it says the fruit balances the wine.

This one’s not as sweet as some of the others I’ve had. But I think it’s better. It doesn’t only rely on sweetness. It’s more bold and flavorful.

Use it as an aperitif. We had it about ten minutes after finishing a healthy chicken and pasta dinner.

The bottle recommends it on ice or mixed with a sparkling wine. We had it the former. It performed well as an aperitif.

I’ve bought this bottle before. One of my friends hosted a New Years party and I contributed this bottle, plus some stuffed mushrooms I made. The stuffed mushrooms went really fast. I simply took mushrooms, removed the stems, filled them with shredded Italian cheeses, added a slice of fresh garlic, then peppered them.

Super easy. Broiled them for about five minutes.

As for the Hatozaki, one of the guys at our Alcoholics R Us recommended it. We spent about 5 minutes talking about the different Japanese whiskeys I’ve had in the past. I showed him pictures of the bottles we drank in Vegas last year for the Billy Idol show.

At the New Years party, four of us murdered that bottle. Straight. No ice. Just whiskey in a glass.

I’ve heard from others that the regular Hatozaki is smooth but doesn’t have that much flavor. This one though does. It’s super smooth but also pretty flavor rich.

I don’t remember exactly which flavors though. That was New Years, which is now five months ago. We haven’t opened this bottle yet.

The other two, and the Sea Cave story

Oh, that painting in the background? Roxy and Allie, based off of a picture I took in Maui while exploring a sea cave.

We went with about thirty people and I somehow split off from most of the group. I was telling them that there was this gorgeous sea cave and they ended up doing something else. Their loss.

Yeah, we’ve all been drinking. But when drinking, I still know my priorities.

I ended up with a bunch of kids in their early 20s exploring the cave. They were cool. One of the girls was going around topless and everyone was laughing.

Then, they found a part they could climb out of. I’m old, so I went out the easy way. Had I been a few decades younger, I would have climbed the cave walls like they all did.

Heh. Funny how we change with time.

So for the painting, I simply put Roxy and Allie in there and made the water deeper than it was. Otherwise, it mostly looks like the pictures I took.

I love how this painting came out and I’ll sell matted prints on this site eventually. I’ll get this painting framed and put it up for sale at an art gallery later on too.

Men – don’t ever lose your frame