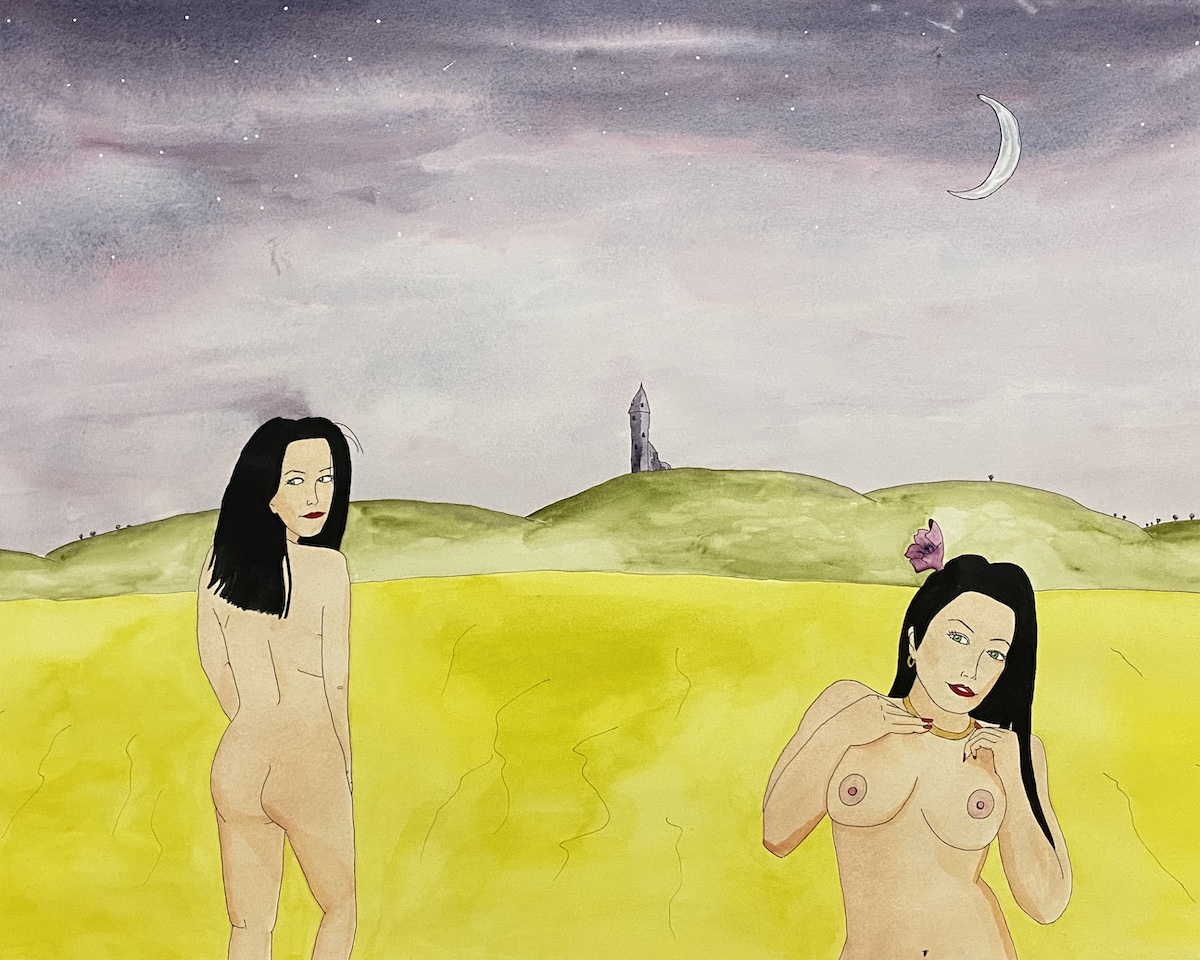 I’ve said before that I’m an unlikely watercolor evangelist. Everyone thinks of Aunt Bessie’s birds and flowers when they think of watercolors. Nobody thinks of nude women.

To be honest though, I started off with watercolors because of reason three. Which I’ll get to.

Before, I just drew stuff and inked it. I did a lot of political trolling cartoons. Which is funny because I’m not a political guy at all.

I got friends though that are political junkies so they asked me to do this and that. I said sure. Why not?

Then, Allie pushed me into taking my art seriously. And I found out I could actually make money doing this. So Allie and Roxy now get a cut of my earnings. They used to do it for free. But now that I’m profitable, I’m going to share the wealth with the two girls who made it all possible.

Anyways, let’s get back to five reasons why watercolors rule.

Plays along well with others

Artistically, I’ve done everything from watercolors to spoken word. Yes, I’m actually pretty good at the latter but to make money doing it, you have to commit to it full time and really self-promote.

I currently use three, and occasionally four things – watercolors, gouache, and ink. The fourth? I’ll occasionally mix in colored pencils.

The colored pencils end up blending in with the watercolors so nicely that unless you look extremely closely, they look like watercolors. I created one of the trees doing exactly that technique.

Ink of course because of my personal preference. Some artists like distinct lines. Others don’t. I fall into the former category. I love distinct lines and inking before painting with watercolors will do that trick. Just be careful though that you use ink that won’t smear. My article on inking watercolors will explain that stuff in detail and also recommends the pens I use.

Note that I do absolutely zero affiliate marketing on this site, so I don’t make a penny for my recommendations. I have nothing to gain by recommending products. I recommend only what I like.

As for gouache, some folks categorize gouache together with watercolors. Others say it’s a separate medium. Both are right. But I say the latter because I don’t blend them. I use one, then the other, depending on the circumstances.

I personally use mostly Titanium White or Ivory Black for gouache. I rarely use any other gouache color.

It’s a stylistic thing. Not at all a slam on gouache.

“Oh no! I’ve spilled oil (or acrylic) paints on my clothes or on the rug? What do I do?”

(That artist goes into a panic and rolls into a ball and starts sucking his thumb).

With watercolors, just clean it up. Might stain a little but it’s significantly less of a deal.

I also heard from an artist who loves acrylics that when she forgets to clean a brush overnight, she’s got a serious problem. That’s the other thing, cleaning brushes alone is a pain in the ass. With watercolors, just rinse them out with water. Super easy.

I made some financial decisions recently that didn’t pan out as expected. So now, we’re stuck living in a tiny ass apartment with no space at all.

I literally paint on the floor. I do not own an easel. There’s no space for a desk.

We have a dining room table and that’s it, but I don’t like to paint on it.

I eat way faster than my wife does and I don’t want to wait for her to finish eating. Rude? Not really because we’re still right next to each other. We’re still talking while she’s eating and I’m painting. She knows that I love to maximize my free time since my free time is very limited.

You don’t need any space for watercolors. A floor will do perfectly fine.

When I paint skin colors with watercolors, I paint 7 layers. I need that many layers for the girls to look real.

And once it’s done? The girls really pop!

My photos don’t do justice to the paintings. If you saw them in real life, you’ll see exactly what I mean.

That’s yet another reason I don’t like selling paintings online. For one, I prefer to meet the people I’m selling to and interact with them. One, I even got a hug. That’s as real as it gets.

But for another, the girls just don’t pop on a computer the way they do in real life.

Digital cameras simply don’t pick up all the layers of paint like your eyes do. They may come close. But there are no substitutions for your real eyes. Note, that was one of the last things Darth Vader said before he died. There’s a reason for that.

And last, but by no means least, randomness.

Have you ever taken a Rorschach test? If not, you should.

They’re a lot of fun. You don’t have to see a shrink to take the test. Just find one or two online, print them out, drink a little bit too much absinthe with your bestest buddies, and you could have a whale of a time.

Those parts you don’t control, they have a bit of Rorschach to them. Which I strongly feel is a good thing.

A strict State would drive me crazy. Not to get political, but too much order squelches good art. I want Freedom, as much as possible.

And a little bit of chaos never hurt anybody. (Unless of course we’re talking about hand grenades).

I don’t like to interpret all my works for you. I’ll name it. And let you decipher the rest.

Are those two girls in cahoots with the Will O’ The Wisps? Or are they victims?

You tell me. I’m not going to tell you what I intended.

And yes, there are some faces in there. Some of them intentional. Some of them came naturally from the randomness of the watercolors. I also won’t tell you which were which.

Why I prefer hot press paper

You don’t need that many watercolors

Watercolor on wood vs paper