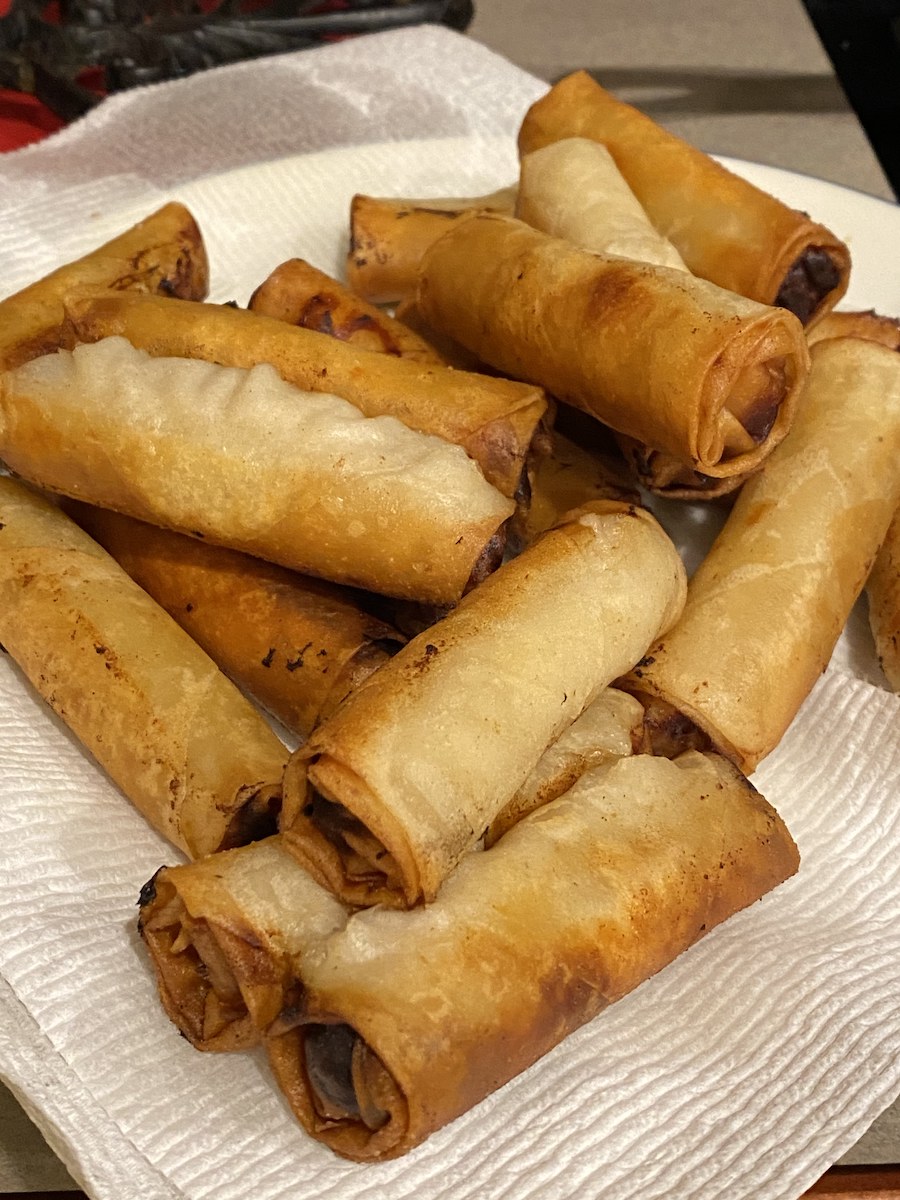 Of the girls I’ve been with, not one of them can cook as well as I could.

What’s especially bad is nowadays, you got these chicks coming out of college taking pride in not being able to cook. Which is retarded.

Cooking saves your health plus saves you money. Folks who eat processed foods will suffer all kinds of health problems in their 50s, often sooner.

Every once in awhile though, I’ll cook something bad for you. Like lumpia for instance.

This is a Filipino deep fried food. No, I cheated. I didn’t make them from scratch.

That takes forever! You have to roll them up one by one.

Nope. I found a Filipino grocery store nearby and bought a package of them. Then simply cooked them up in oil, which is horrible for you. I’ll probably make these once a year, but my best friend from high school is coming over with his wife in a bit. They’ve had my healthy food a bunch of times and now, I feel like cooking something completely different.

I can cook Mexican, Filipino, Italian, Indian, Louisiana, Southern, and a slew of various one offs. I have a few cookbooks, but I only use those for inspiration. I’ll half ass follow the recipe, then add or subtract whatever I feel it needs.

So no, nothing I make is “authentic.” Delicious? Yes. But authentic? Nope.

When I cook, I cut down the carbs drastically. So rice and beans in Mexican food? Hell no! You’ll get tortillas with meat and veggies. Just as delicious but not at all fattening.

Italians are pretty slim to begin with but that’s because the authentic versions of their diets are excellent. You’ll see more meat and fish and less carbs than their American counterparts (Americanized Italian food).

I wish I could cook Japanese, Thai, Vietnamese, and Spanish food. Maybe one day I’ll learn some of those. Just haven’t gotten around to it yet.

Tapas are the bomb! My wife and I spent six days in Madrid and three in Barcelona (not enough time for either city) and pretty much had tapas for breakfast, lunch, and dinner.

Anywhere you go in the world, folks love to talk about their cuisines. Plus in the States, you got so many people coming from so many places. Simply ask them how to make something.

You’ll be surprised how much their eyes will light up. Especially when you actually listen.

I strongly think a man should know how to cook. He can always use that as a pickup line. “Hey, come over for our bbq. My food is so good that my ex who hates my guts will still show up and you could laugh at her lack of fashion sense.”

I know a guy who threw great bbq’s, always had hot chicks over, and never knew how to seal the deal. Like twice, he had this hot Russian chick who obviously wanted to fuck him. Every other person at the party, including (and especially) his female friends were egging him on too. But he never made a move. (Insert eye roll here).

Food is community. You cook and people come over.

Heck, take your dog for a long walk. You can always smell a bbq. You can’t help thinking “would be nice to drop by.”

Food is the universal get together. If someone invites you over, you can always assume there will be food. Unless they’re a shitty host or you’re only there to drink. (Knowing how to make a mean drink is pimp too, but that’s a future article).

I got a funny story for you. I know someone who owns a sushi restaurant in a town where everyone’s a millionaire. No, I won’t disclose the location.

Anyways, when everyone’s a millionaire, “hi, I’m a millionaire” is a horrible pickup line. I discussed being how being different is a good thing several times now.

He knows all this shit. This guy doesn’t need to learn game. He already knows it.

He currently has a hot babe girlfriend, which is to be expected with this guy.

When a hot chick comes into his restaurant, he doesn’t show he’s the owner. Rather, he pretends to be one of the chefs.

Owning a restaurant in a rich town? So what? It means you do a lot of paperwork.

That’s pork lumpia. Those are Filipino egg rolls. Very bad for you but very delicious!

If you like this blog, check out some of the other stuff I do. I’m also a composer. Our first EP is 5 songs – 2 dance songs (including one straight up Disco), 2 waltzes, and an 80s style power ballad, all backed by either a string orchestra or a string quartet.

I play the piano, synths, guitars, and even add some background vocals. This little video clip features the very lovely Jin who I’ve worked with several times.

Stairs vs the Elevator and why it matters